Crossmolina is a relatively small town in County Mayo, in the West of Ireland. Crossmolina AFC was formed in June 1992 by Paul Flaherty, Adrian Conway and John Heffernan. It began as an Under 18 side and as the players matured so did the competition with the club joining the Mayo League in Reserve Division Two for the 1993-94 season. The early days witnessed us playing our home games at the Convent of Jesus and Mary in Gortnor Abbey in farcical conditions that were not condusive to good football. The muddy quagmire was only troubled by sporadic patches of greenery and even these were clumps of rushes, rather than grass! We later moved to the excellent Community pitch in Kilmurry before finally being granted a 25 year lease on our own pitch in Abbeytown. Our first achievement of note was finishing second in Division Three in 1994.

This gained us promotion to the Second Division where a brief stay culminated in promotion once again in 1996. The first game of a deciding two game playoff ended 2-1 in Crossmolina's favour and only a Michael Moyles goal ensured us of victory in the return leg's 2-2 draw. Off the field disaster struck in October 1998 when Hurricane Mitch ripped through our Abbeytown ground, leaving our flimsy dressing rooms all over the pitch in a mangled heap. We have remained in Division One since (it is now called the Premier Division) but Cups have provided us with plenty of memorable moments. After defeat in the Tonra Cup Final we bounced back in later years to qualify for the Tuohy Cup Final in 1999. Once again we fell at the final hurdle when the reigning Mayo champions Achill Rovers were triumphant 2-1. Crossmolina registered a significant scalp in the 2000 League Cup when the reigning champions of Mayo, Manulla were soundly beaten at Abbeytown.

Our 2001 season meandered to a meaningless halt in November after a season of mediocrity. Manager Bert Carolan resigned after guiding the club for the vast majority of its existence, leaving a huge vacancy for new boss Gerry McGuinness to fill. His stay during the 2002 season proved to be short-lived and after a month of the season he resigned, disillusioned with lack of commitment from the players. He was succeeded by his Assistant manager, Michael Canavan who followed in the traditions of previous seasons by finishing midtable in both his campaigns while never really threatening to win anything. He chose to follow a footballing career coaching the youths in Kilmurry and as a result Adrian Conway became the clubs fourth manager in four years. True to form he guided the team to a midtable finish and a brief dalliance with the Cup competitions but ultimately his debut season will be remembered for the changes in the team. We experienced our greatest addition of new players since the inaugural season and it proved to be a timely influx. 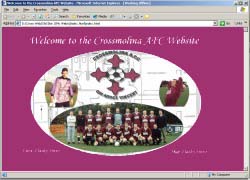 Progress on the field has been reflected in advances made off the park as the much needed clubhouse finally began to rise from behind the dilapidated shacks that masqueraded as dressing rooms for too many years. The Mayo County Council granted the club a 25 year lease on the premises in December 2001 and followed that by granting planning permission in February 2002.Then in July 2003 the club was fortunate enough to secure a grant for €35,000 from the Deptartment of Arts, Sport and Tourism and that has allowed the commencement of the clubhouse project. The demise of the existing cabins is long overdue and hopefully the end of 2005 will witness a new super-improved changing facility for teams at Abbeytown. The club successfully applied for another grant to finish the clubhouse in 2005 and the award of an extra €18,000 was crucial to guarantee completion of the project.

On the field the club made the big leap from the never-ending limbo of the Premier Division into the Valhalla of the Super League. The 2005 season was a resounding success with the team hovering around the fringes of the promotion race all season long before finally assuming a berth in the top flight after a playoff victory over Fahy Rovers in Bangor on September 18th. The success continued when the club's participation in the Tuohy Cup Final was rewarded with a nailbiting penalty shootout victory over Ballinrobe Town.

The B team fared no better with John Moyles partially relinquishing his managerial involvement after four games and then colleague Matt Coldrick departing shortly after. A tempestuous season culminated in the A team's second consecutive relegation while the reserves propped up the whole league. With both teams struggling to field teams it was decided to return to basics and the B team was sidelined for the 2012 campaign. The ploy failed to arrest the club's plummet down through the divisions though and another abject campaign ended with the team inheriting the position that their B team had occupied in the bottom division during the previous three seasons.