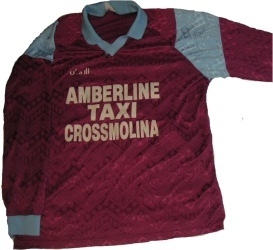 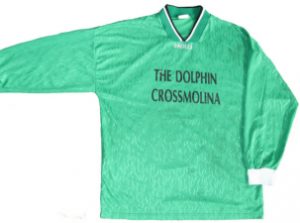 Crossmolina AFC debuted in a garish jersey that endured more due to lack of funding for a replacement rather than through any love for the design. A faded sky blue jersey was festooned with maroon (pink!) diagonal strips that reminded opponents more of the hazy BBC reception on their televisions than a world-beating football team. Amberline Taxis were the clubs sponsors on this kit. But like any old pictures with embarrassing haircuts and naff clothes there is a perverse fondness associated with these hideous shirts by all who wore them.As time passed and the club got a firmer grasp on its identity the kit was replaced by a simpler maroon jersey with sky blue bands around the shoulder area. Amberline Taxis maintained their sponsorship of the team, reflecting the still youthful nature of a team that relied on bus transport to away games as their fathers didn’t yet trust them with the family hatchback! All changed, changed utterly in 1997. The offer of a cheap kit was too good to refuse and,tradition-be-damned, the club moved to a green kit that was loathed by everyone who wore it for each of its ignominious seasons. Stylistically it failed to capture the imagination with its insipid green colour and everyone who donned it will shudder at the memories of the physical repercussions of ninety minutes spent wearing it! The new sponsorship deal with The Dolphin alluded to the shifting focus of the players. 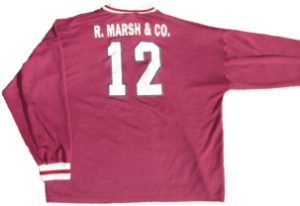 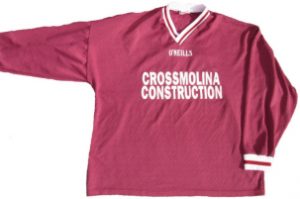 in time for the 2001 season and a the maturation of the club was reflected in the return
to a more traditional maroon shirt. Originally the kit combined maroon jersey and shorts but midway through its inaugural season it became bereft of shorts as the practice of each team member washing the gear led to a mysterious case of vanishing garments. So, suitably chastened, the club opted not to buy any more shorts and instead put the onus on the players to bring their own. By consensus white shorts became the preferred lower half of the kit and it remains to this day. And, more importantly an account was set up in Gallaghers Laundrette to prevent any more shorts from evaporating into thin air. The club took a leaf out of the advert-riddled French League by incorporating two sponsors onto the new kit. There was evidence of the nascent Celtic Tiger with Crossmolina Construction assuming prime billing on the front while Robert Marsh TV and Video adorned the back, just above the numbers. The wear and tear (especially the tear) began to show on the kit during the 2005 season and a decision was made to purchase a new kit. 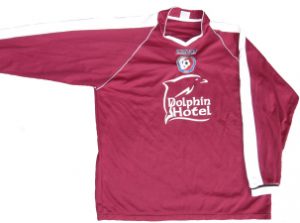 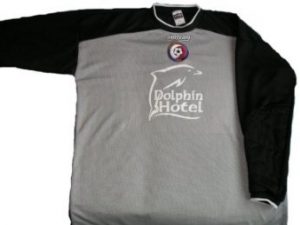 The club's promotion to the Super League and impending appearance in the Tuohy Cup final warranted the purchase of shorts and socks as well so, despite past experiences, the club bought a full kit and distributed the gear to the players with warning to take care of them. The Dolphin assumed sponsorship duties again with a new logo that embellished the jersey. For the first time in the clubs history the crest adorned the jersey.An unmentioned but valuable benefit of the maroon jersey has been the lack of need for a second kit due to the absence of any other team in Mayo sporting similar colours. The only time a possible clash of colours was averted was when Renmore of Galway visited in 2001 and 2002 season Cup matches. But a bit of prior notice allowed them to bring their white kit and a potential problem was conveniently solved. Multiple factors - the onset of a recession rendering the sponsor defunct, the addition of a B team plus the fact that a jersey from the previous set was lost - necessitated the acquisition of a new set of jerseys for the 2009 season. To provide a distinct alternative to the traditional maroon jerseys a set of blue and white striped Umbro jerseys were purchased. The numbers on the back were of sufficient quality to survive two washes but thereafter they gradually declined until after a few months they became practically illegible. 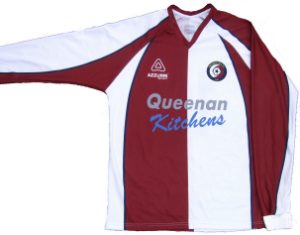 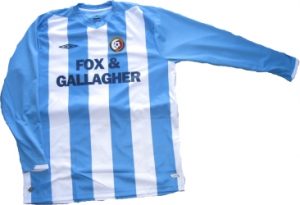 Like every young upstart in a family, the newly-formed Reserve team inherited the first team's hand-me-downs and the elder squad paraded the new threads in the Premier Division for the time ever. This arrangement proved satisfactory for little more than a season though as the Reserve team, comprising of players of more considerable girth, found the jerseys to be slightly restrictive. Also, the tops were worse for wear after five seasons of constant use. So after surviving on six different jerseys during its initial seventeen years the club splurged on their second set of new jerseys in two seasons. And quite snazzy they were too. After suffering the ignominy of being completely absent from the previous season's purchase the maroon was further marginalised as the clubs primary colour on the new threads. And despite being a large size they certainly felt like a very snug medium to this mannequin.